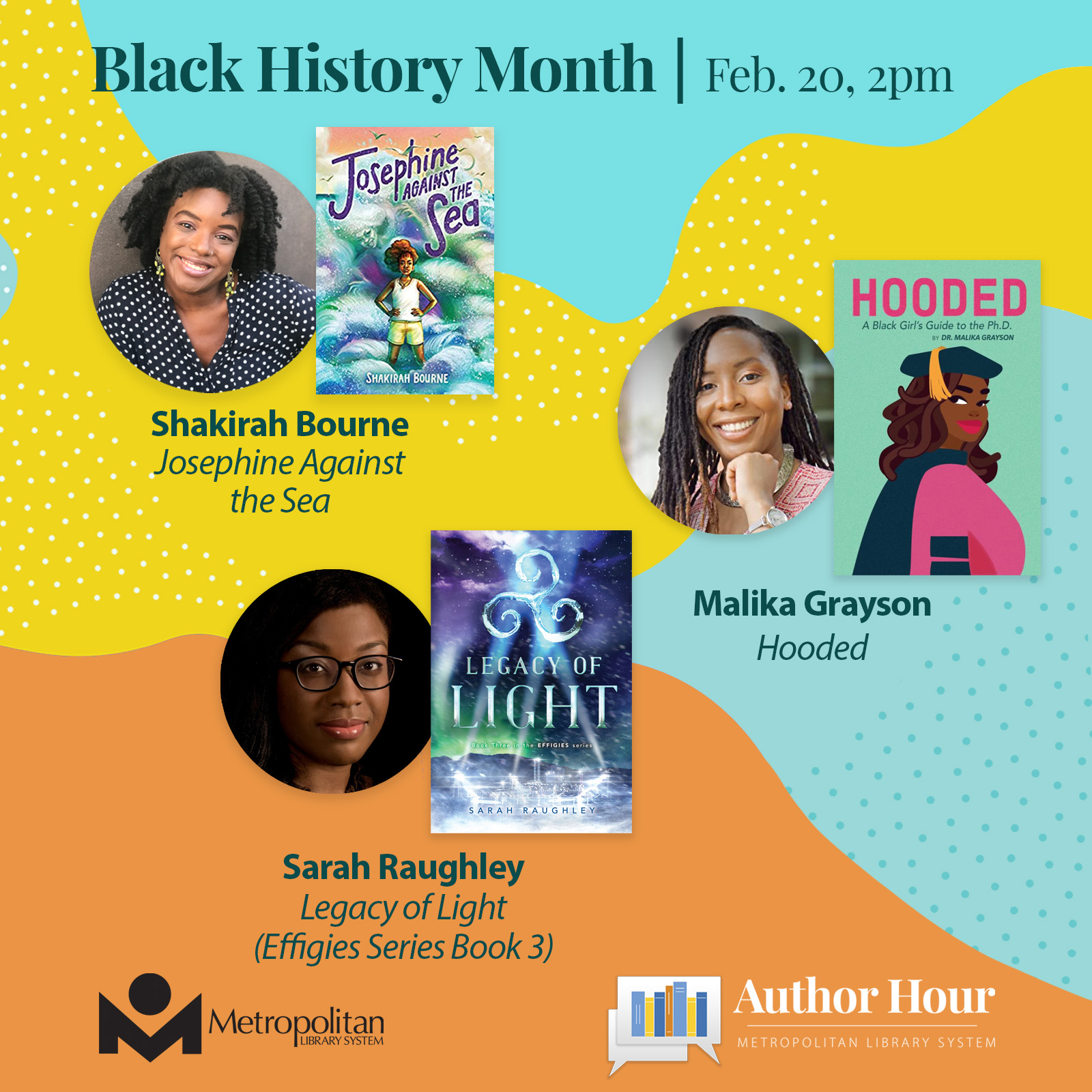 Adults
Please note you are looking at an event that has already happened.

Join us on Facebook Live for a new segment of Author Hour (on the 3rd Saturday each month!), where we discuss all things books and writing with authors. We are joined today by authors Shakirah Bourne (JOSEPHINE AGAINST THE SEA), Malika Grayson (HOODED) & Sarah Raughley (Legacy of Light).

Shakirah Bourne is a Barbadian author and filmmaker. Her first feature film, the comedy-drama, PAYDAY, was screened throughout the Caribbean, USA and UK.The film won several awards, including Best Drama at the National Film Awards UK, Best International Feature at the Charlotte Black Film Festival and best UK Feature at the London Independent Film Festival. Her short stories have been featured in many literary journals. She was a finalist for the BURT/CODE Award for Caribbean Literature in 2018. The Caribbean edition of her middle grade novel, MY FISHY STEPMOM, was published by Blue Banyan Books (2019) and the North American edition, JOSEPHINE AGAINST THE SEA, will be published by Scholastic in July 2021. She was a Part-time Lecturer at the Errol Barrow Centre for Creative Imagination, University of the West Indies, Cave Hill Campus, and is a Part-Time Lecturer in Screenwriting at the Barbados Community College. She currently holds Certificates in Screenwriting from the Barbados Community College and the University of Edinburgh, and an MA (Hons) in Arts and Cultural Management from Queen Margaret University.

Shakirah's book will be released in July 2021.

Dr. Malika Grayson is a speaker, STEM advocate, and engineer based in Virginia. Growing up in Trinidad and Tobago, she left the island at the age of 19 to pursue her education. She holds a bachelor's degree in Physics, and a master's degree and a doctorate in Mechanical Engineering. She has shared her experiences about being a Black Women in STEM on a number of platforms including university collaborations, conferences, and special events. HOODED is her first book. Learn more at malikagrayson.com

Sarah Raughley grew up in Southern Ontario writing stories about freakish little girls with powers because she secretly wanted to be one. She is a huge fangirl of anything from manga to sci-fi/fantasy TV to Japanese role-playing games, but she will swear up and down at book signings that she was inspired by Jane Austen. Sarah has been nominated for the Aurora Award for Best Young Adult novel and works in the community doing writing workshops for youths and adults. On top of being a YA writer, Sarah has a PhD in English, which makes her doctor, so it turns out she didn’t have to go to medical school after all.

As an academic, Sarah has taught at McMaster University and acted as a postdoctoral fellow at The University of Ottawa. Her research concerns representations of race and gender in popular media culture, youth culture and postcolonialism. She has edited special issues in academic journals such Safundi, Popular Music and Society, and Atlantis: Critical Studies in Gender, Culture and Social Justice. She’s also written freelance pieces for The Conversation, Quill & Quire and Zora Magazine.

Be Advised:  This program may be photographed and/or videotaped for publicity purposes.

By Attending, you consent:  To the use of your voice and likeness in future publicity uses that contain content from this event. If you do not wish to be on camera, please let us know.