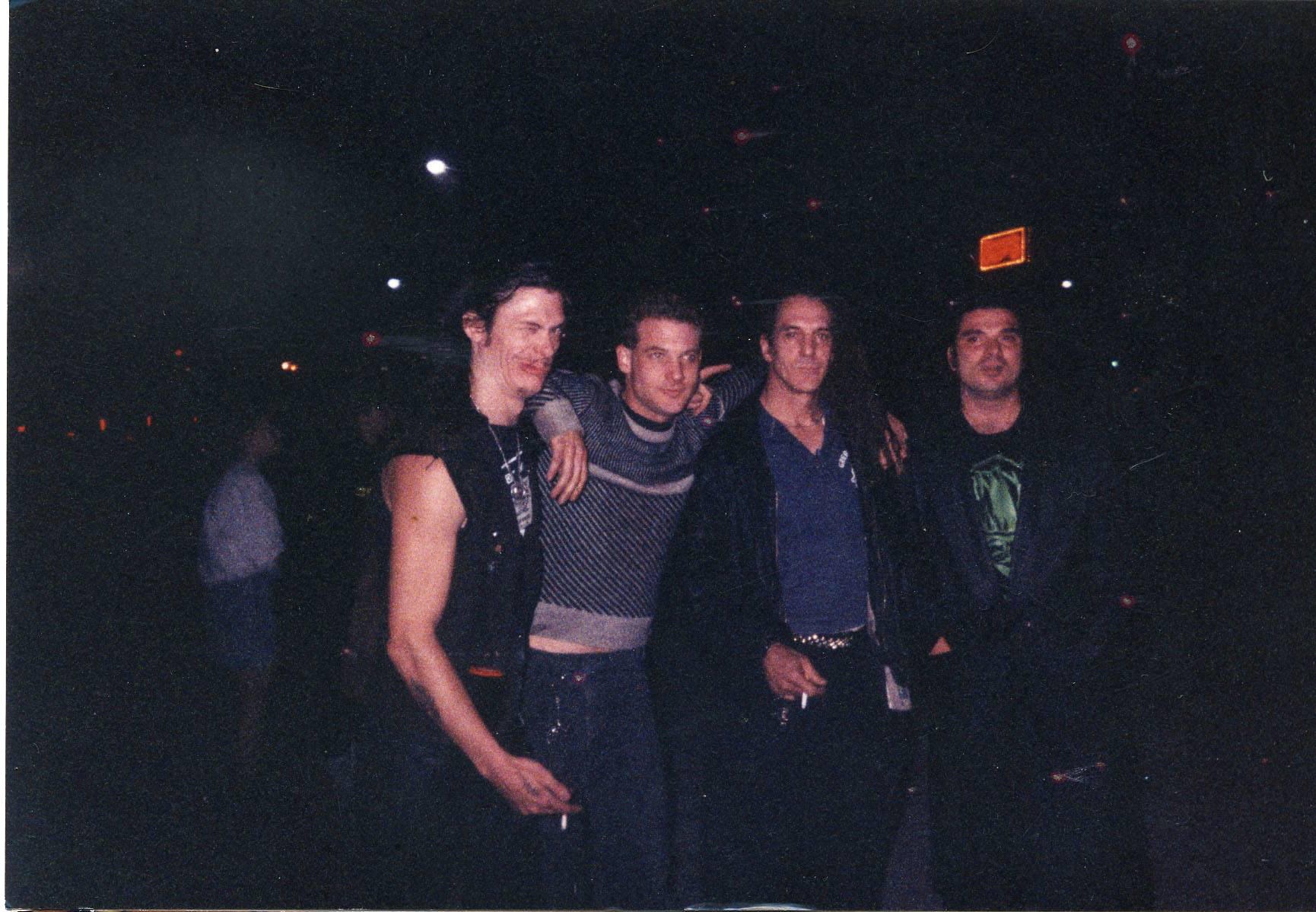 Flipper In Parking Lot of Planet Earth Just Before The Infamous House Show.

"Flipper was originally supposed to open for Gwar at a club called Planet Earth. Planet Earth had failed to pay their bills and gotten their power shut off but rented a generator which was jury rigged into the building’s electrical system. Gwar’s tour manager refused to plug in any of their stuff into that set up till it was OK’d by the fire marshal. That would have taken too long to do even if it would have passed, and thus the show was canceled.

I had been contacted by Gwar’s PR people who set up an interview due to my ‘zine I was doing at the time. Unhappy that the show was canceled, I decided to head to the venue, see if any of the bands were there still and perhaps get my interview. Robert, Wendy, and Chris(?) decided to go with me as there was nothing else going on. Upon arrival at the venue, the bands were long gone, but the promoter was still there and we knew each other and talked because I was always showing up at his shows, often early, for my ‘zine. He told us which hotel they were staying at, and we headed that way.

Upon arrival, we saw a Winnebago with Flipper graffiti spray painted on it. We got out of my car as two people were getting out of the Winnebago. I was walking up to them asking if they knew were Flipper was, because although I had an interview with Gwar, I really wanted to meet Flipper, because Gwar’s OK, but Flipper is awesome and means a lot to me (those pretty much were my exact words.) The two looked at each other, and the guy turned to me and say “well, I’m in Flipper, and she’s in Gwar.” At that point Slymenstra Hymen threatened to hit me for dissing her band, but much to my dismay, did not.

Anyway, things were chaotic. The bands had no plans and were running all around, mostly just trying to get something to eat on what turned out to be a night off from the tour. We ran around trying to catch up with the rest of Flipper, were mistaken for one of the bands by hotel staff, but finally managed to catch Flipper all together in the parking lot (somewhere, there is a photo) as they were going to get dinner. They agreed to a short interview right there as they were starving.

The interview was chaotic and short (and no longer exists unfortunately). There were four of them and four of us, so there were four question and answer sessions going on at the same time, often crossing from one to another. At some point, Bruce Loose was speaking as to how they really wanted to play and see the local scene in OKC. Robert spoke up and said “You can play at my house.” Bruce responded back with if they had a sound system and opening band. Robert replied that they’d get Chad’s sounds system and his band would open for them. Flipper said ‘Great, give us an hour to eat dinner, you know where we are, get back to us tell us where it’s at, and we’ll play for donations.’

At that point, we split up. Wendy and I had the job of telling everybody we could find. Robert would head off to wrangle sound system and band. We went back to the venue, told some people, went to some friend’s houses and told them, and then called just about every phone number we had to spread the word. ( I unfortunately failed to call my own house and inform my roommates however, for which I shall forever feel bad.)

Robert had just moved out of his house. He had also just resigned the lease and moved back in (with Wendy as his roommate IIRC). This meant the house was utterly empty except for his bedroom, some stuff in the kitchen, and a couch. The layout was adjoined living and dining room into essentially one long room with the kitchen behind it. Within two hours from talking to Flipper, there were a bunch of screaming punks getting drunk and having a party. The usual bunch was showing up along with people that nobody had seen for years from OKC, Edmond, Norman, etc. Robert’s band set up the sound system and started playing. He was good about passing the bucket and getting donations for the show. This went on for about an hour and I remember one of those people nobody had seen forever later wanting his money back because he didn’t think the show was going to happen despite Robert saying he’d been in contact with the band and everything was arranged. I think he got his money back and left. Ten minutes later a spray painted Winnebago was pulling into the driveway, with Flipper, Gwar (sans costumes, people always ask about the costumes), tour manager, and roadies ready for a house party.

Upon hearing that a local band had already played, Flipper set up their gear in the dining room and played. Dave Brockie danced in front running interference between the slam pit and the band, shoving people back into the pit rather than colliding with people playing instruments. I believe he did sing vocals for a song or two also. Bruce dug through the bucket of donations and came out with $440, several cans of beer, and some hits of blotter acid (which he ate right then and there). Their tour manager would tell me later that night that it was about as much as they would get for a normal show. Everybody else just watched the band, sat around, drank beer, and it was generally a house party complete with people talking in the kitchen. Eventually, things wrapped up and people piled back on the Winnebago and it took off. Cops did show up and were walking onto the lawn when I yelled, “the bands have finished, the party is over, and everybody is going home.” They turned around, got back in their cars and left without a word.

Besides the tales and video that survive, the concert also made it into Details magazine. It seems that with Flipper’s new record deal, they wanted some reporting on them and flew somebody out for the show. The article reports on how the show was canceled, he was sitting in Gwar’s hotel room when somebody came in saying “We’ve got a gig, let’s go!” and the party from his perspective."