All Metro Library locations are now in a "Grab and Go" stage with select services including limited computer use, copy/fax/scan use and minimal browsing. Masks are required.  Click here for more information. 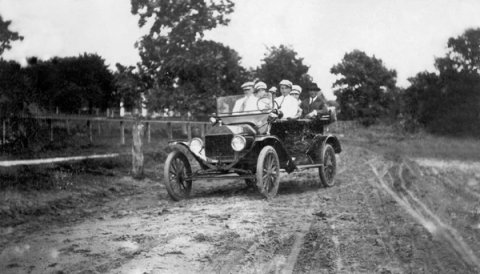 The town of Luther was platted in March of 1898. Named for Luther Jones, Oklahoma City businessman and son of C.G. Jones, it was located about 30 miles northeast of Oklahoma City, on lands which were once part of the Kickapoo Reservation. Luther was incorporated in 1905.

One of the first businessmen who located there was W.J. Arthur. He purchased several lots on the northeast side of town and opened a flour mill and a cotton gin. In turn, these processing plants attracted farmers who required additional services. Other businessmen, seeing an opportunity, flocked to the town. As was the case for other small towns in Oklahoma, railroad connections and agriculture provided an economic base for the success of local businesses. By April of 1899, the First National Bank of Luther opened, and was later joined by a hotel, lumberyard, livery stable, drug store, hardware store, blacksmith shop, and grocery store. More than 400 residents occupied the town by 1907.

Luther has retained its small-town feel and many vintage views. The 2000 U.S. census estimates the current population at around 600.  Located along the central route of the Ozark Trails and just south of historic Route 66, the town has three sites listed with the National Register of Historic Places: Engels’ Dry Goods Store, Threatt Filling Station, and the Booher Archaeological Site.

Mysteriously, a wooden statue was unearthed was Luther in the late 1940s and is believed to represent Shou Hsing (or Sho Sing Lao), a Chinese god of longevity. How the statue came to Luther remains unknown.