Metropolitan Library System is one of 50 U.S. libraries selected to host Americans and the Holocaust, a traveling exhibition from the U.S. Holocaust Memorial Museum that examines the motives, pressures, and fears that shaped Americans’ responses to Nazism, war, and genocide in Europe during the 1930s and 1940s.

The Americans and the Holocaust exhibit will be on display at the Dowtown Library, along with a series of related special events from Thursday, January 5 to Sunday, February 12.

Based on extensive new research of that period, Americans and the Holocaust addresses important themes in American history, exploring the many factors — including the Great Depression, isolationism, xenophobia, racism, and antisemitism — that influenced decisions made by the U.S. government, the news media, organizations and individuals as they responded to Nazism. This exhibition will challenge the commonly held assumptions that Americans knew little and did nothing about the Nazi persecution and murder of Jews as the Holocaust unfolded.

Drawing on a remarkable collection of primary sources from the 1930s and ’40s, the exhibition focuses on the stories of individuals and groups of Americans who took action in response to Nazism. It will challenge visitors to consider the responsibilities and obstacles faced by individuals — from Franklin Delano Roosevelt to ordinary Americans — who made difficult choices, sought to effect change, and, in a few cases, took significant risks to help victims of Nazism even as rescue never became a government priority.

The Holocaust Resource Center at the Ronald J. Norick Downtown Library is dedicated to the memory of Holocaust survivor Henia Ring Shiff, who devoted her life to preserving the memory of the Holocaust and teaching lessons of courage and tolerance.

Americans and the Holocaust was made possible by the generous support of lead sponsor Jeannie & Jonathan Lavine. Additional major funding was provided by the Bildners — Joan & Allen z”l, Elisa Spungen & Rob, Nancy & Jim; and Jane and Daniel Och. The Museum's exhibitions are also supported by the Lester Robbins and Sheila Johnson Robbins Traveling and Special Exhibitions Fund, established in 1990. 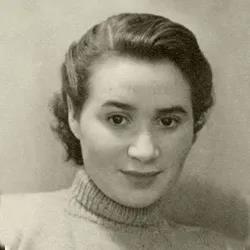 In the summer of 1939 there was a little girl living in Lodz, Poland who was looking forward to the first grade. It was while on the family’s summer vacation that Eva Unterman heard her family members quietly talking about Germany and war. They cut short their vacation and went home to Lodz and soon little Eva was looking at black shiny boots. The German invasion of Poland was underway. Listen now to Eva Unterman recall her days of how Eva’s family was forced into the Lodz Ghetto, and after four years deported to Auschwitz and then to a labor camp and then forced to march in what was called the Death March. In May of 1945 Eva and her parents were liberated, survivors of the German Third Reich which took the lives of three million Polish Jews in World War II. Oklahoman Eva Unterman tells her story to honor the millions of children whose lives were cut short by the Nazis, and to be sure the Holocaust shall never happen again. For Eva, the invasion of Poland begins when she is six years old.

Her story is preserved forever by the VoicesofOklahoma.com and its generous sponsors. 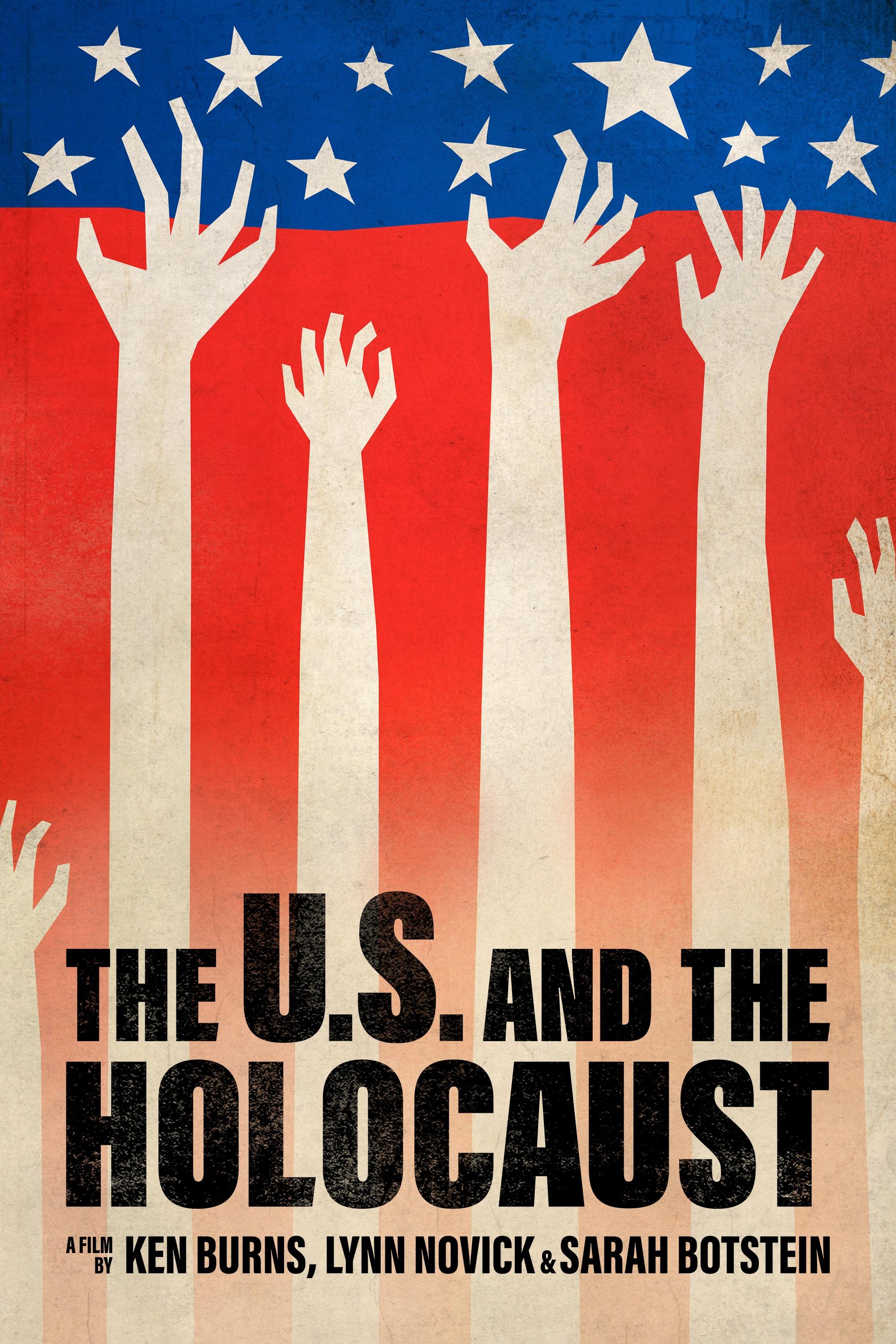 The U.S. and the Holocaust, a new three-part, six-hour series directed and produced by Ken Burns, Lynn Novick and Sarah Botstein, explores America’s response to one of the greatest humanitarian crises of the 20th century.

Inspired in part by the United States Holocaust Memorial Museum’s “Americans and the Holocaust” exhibition and supported by its historical resources, the film examines the rise of Hitler and Nazism in Germany in the context of global antisemitism and racism, the eugenics movement in the United States and race laws in the American south. The series, written by Geoffrey Ward, sheds light on what the U.S. government and American people knew and did as the catastrophe unfolded in Europe.

Combining the first-person accounts of Holocaust witnesses and survivors and interviews with leading historians and writers, the U.S. and the Holocaust dispels competing myths that Americans either were ignorant of the unspeakable persecution that Jews and other targeted minorities faced in Europe or that they looked on with callous indifference. The film tackles a range of questions that remain essential to our society today, including how racism influences policies related to immigration and refugees and how governments and people respond to the rise of authoritarian states that manipulate history and facts to consolidate power.

Check Out the U.S. and the Holocaust Series 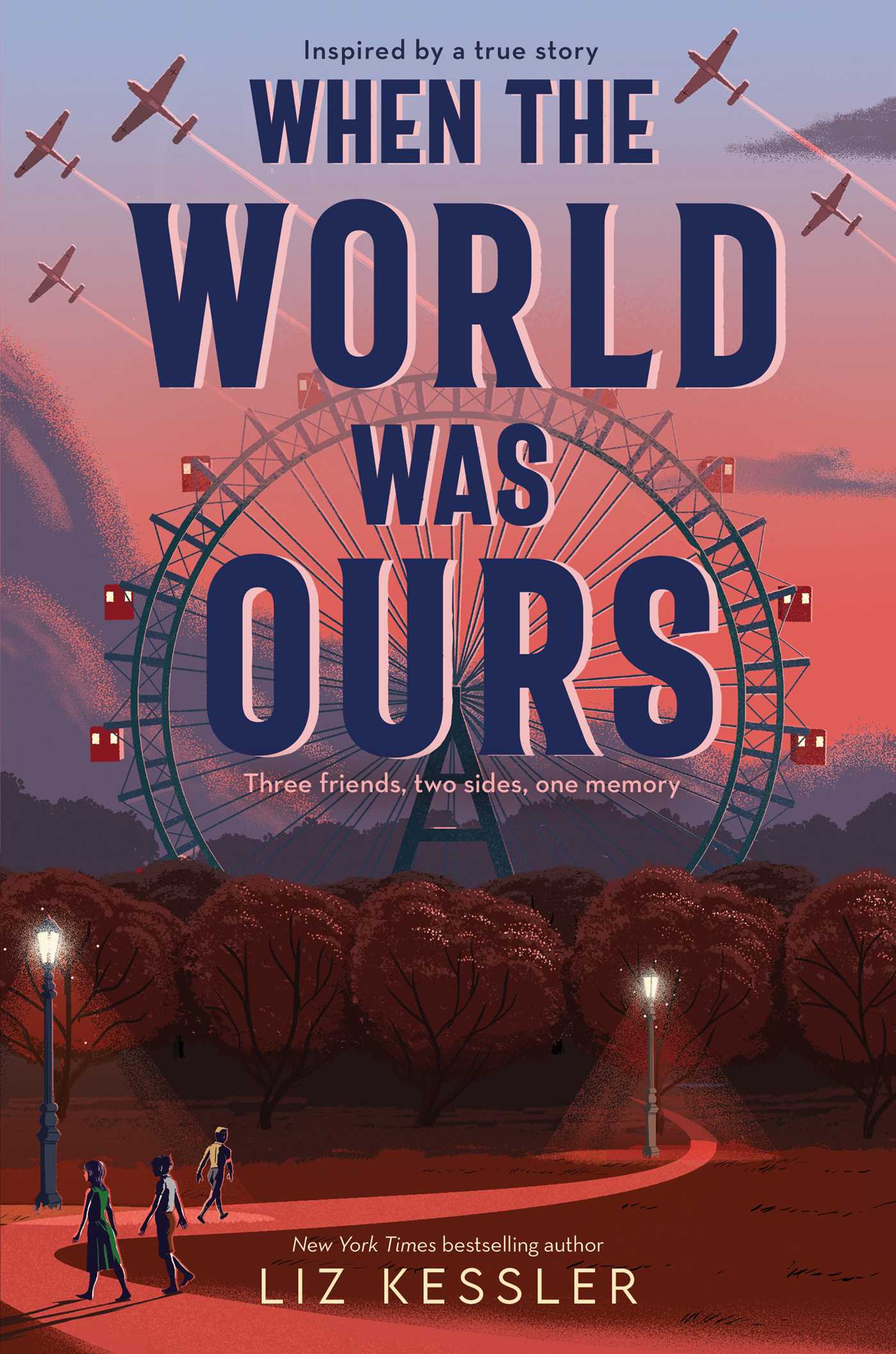 Three young friends—Leo, Elsa, and Max—spend a perfect day together, unaware that around them, Europe is descending into a growing darkness and that they will soon be cruelly ripped apart from one another. With their lives taking them across Europe—to Germany, England, Prague, and Poland—will they ever find their way back to one another? Will they want to?

Inspired by a true story, When the World Was Ours is an extraordinary novel that is as powerful as it is heartbreaking and shows how the bonds of love, family, and friendship allow glimmers of hope to flourish, even in the most hopeless of times. While this book is a middle-grade book, this book club is for all ages.

Attend a Book Club at Your Neighborhood Library

Read When the World Was Ours

Can't make a book club or want to start your own book club?

Check out or download a copy of When the World Was Ours . We also have prepared a discussion and activity guide to continue the conversation.

You do not have to be a customer of the Metropolitan Library System to visit the exhibit; however, we would encourage you to sign up for a library card during your visit. Tickets are not required to get into the exhibit. Paid parking is available on the street around the library as well as in the Arts District Parking Garage across the street from the library. The exhibit is self-guided.

The Downtown Library is a stop for the Oklahoma City Streetcar. Fares start at $1 and allow you to visit Midtown and Bricktown.

Thursday, January 5 - Sunday, February 12
The Americans and the Holocaust Exhibit will be closed on Monday, January 16.

Self-guided tours in English and Spanish are available in paper and audio near the exhibit. Guests are welcome to view the exhibit when the library is open.

While you're visiting the Downtown Library check out what other things are happening in the exciting Downtown OKC area: 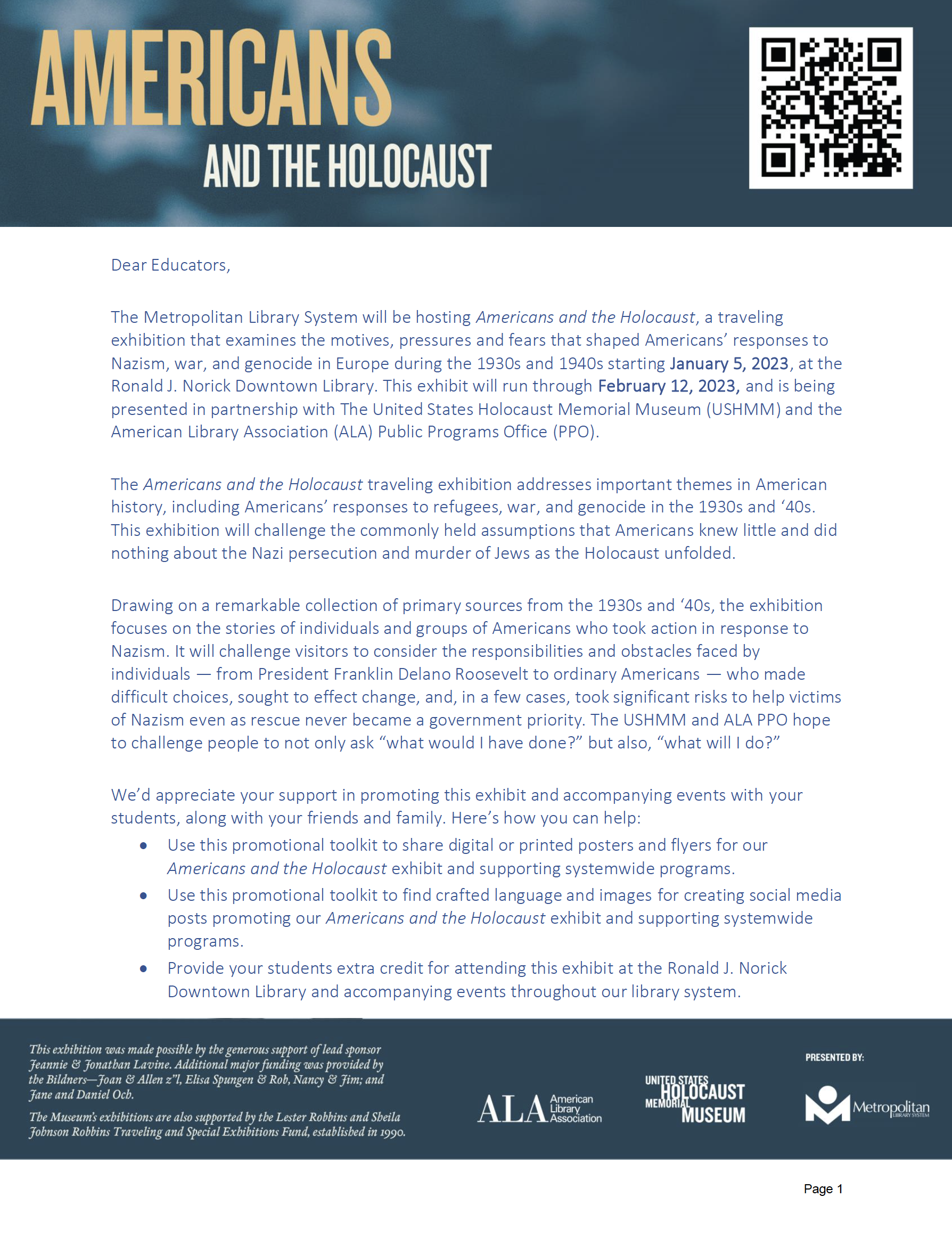 The Metropolitan Library System will be hosting Americans and the Holocaust, a traveling exhibition that examines the motives, pressures and fears that shaped Americans’ responses to Nazism, war, and genocide in Europe during the 1930s and 1940s starting January 5, 2023, at the Ronald J. Norick Downtown Library. This exhibit will run through February 12, 2023, and is being presented in partnership with The United States Holocaust Memorial Museum (USHMM) and the American Library Association (ALA) Public Programs Office (PPO).

We’d appreciate your support in promoting this exhibit and accompanying events with your students, along with your friends and family. Here’s how you can help:

Community Read: When the World Was Ours Book Club

Community Read: When the World Was Ours Book Club

6:30pm - 8:00pm
Northwest Library
Library Branch: Northwest Library
Room: Meeting Room A (Northwest)
Age Group: All Ages
Program Type: Book Clubs
Registration Required
Seats Remaining: 3
Event Description:
Join us for the Community Read as we discuss the award-winning book When the World Was Ours by Liz Kessler. When the World Was Ours tells the story of three young friends whose fates are intertwined during the devastation of ...

12:00pm - 1:00pm
Library Online
Library Branch: Library Online
Age Group: Kids, Teens, Adults
Program Type: Author Events, Book Clubs, Books & Reading
Event Description:
Join us to hear from Liz Kessler, author of our Community Read "When the World Was Ours." Liz is a children's and young adult author based out of Cornwall, United Kingdom.   "When the World Was Ours" was inspired by a true story. It...
View More Events