The Belle Isle Library is located at 5501 N. Villa Ave. It reopened in April 2022 after a renovation added roughly 10,000 square feet, including 5 study rooms, 2 large meeting rooms, and a new makerspace. With this new renovation, we are continuing to support the needs of our community in new and exciting ways. Makerpace technology focuses on DIY projects from sewing to 3D printing. The Taylor Meeting Rooms were made possible by the generous planned gift from the estate of Gordon E. and LaVerne Taylor.

The drive-up book drop is located on the west side of the building and can be accessed from the north end of the parking lot.

Please check the top of this page for notices impacting our hours of operation or services offered.

4:00pm - 5:45pm
Belle Isle Library
Library Branch: Belle Isle Library
Room: Programming Room (Belle Isle)
Age Group: Teens
Program Type: Books & Reading, DIY & Hobbies, Games & Gaming
Event Description:
Are you ready for adventure? Dungeons & Dragons is the original tabletop RPG! We welcome all players, from beginners to experienced. If you already have a character, feel free to bring it. If not, you can create a character sheet on https://www.dndb...

9:00am - 10:00am
Belle Isle Library
Library Branch: Belle Isle Library
Room: Meeting Room B (Belle Isle)
Age Group: Birth-PreK
Program Type: Storytimes
Event Description:
Join us as we read stories, sing songs, play, and move and groove. Littles will naturally gain pre literacy skills as they have fun. Caretakers will have the opportunity to connect with other adults. And magical experiences will be had by all. This p...

This program is designed for children and accompanying adults. Please plan to be in attendance and be engaged with your child for this program.

This event is an online event offered through video and web conferencing software.  If you register for this program, you will be emailed the link to connect digitally.   Please note, you may need to install an app or computer application to attend this program.  If you have any issues connecting, please reach out to askalibrarian@metrolibrary.org.

The grand opening of the Belle Isle Library on Sun, September 29, 1963, marked the completion of the first public library on the northwest side of the city. The next day was the first full day of library service at Belle Isle.

Funds for a new library to serve this part of the city were made possible through the passage of a $40 million bond issue in 1961. The new library was budgeted to cost $298,000. Jack Mills, one of the founders of Turnbull & Mills architectural firm, designed the library. Mr. Mills had a short commute to the job site; he and his family lived two blocks due north of the new library. A 1950 graduate of the architecture program at the University of Oklahoma, Mr. Mills and his partner, John Turnbull studied under the iconic Bruce Goff. Goff’s organic style of architecture is reflected in both exterior and interior design elements of Belle Isle, including its unique pleated concrete roof, Arkansas golden limestone exterior walls, and flagstone terrazzo floor leading from the entry into the library. Mr. Mills designed many buildings in the city including OCU library, St. Anthony Hospital, and McBride Bone and Joint Hospital and Clinic.

Chairman of the Library Board, Mrs. Walter Gray and Mayor Jim Norick broke ground in style riding a bulldozer on a cold December day. Mrs. Charles Lane, VicePresident of the board was the emcee for the ceremony.

Unique design challenges posed by the slope and shape of the lot gave this library a distinctive architectural style all its own. However, that unique design would later prove a challenge to expanding its collections and space. Mills turned the 2 ½ acre irregularly-shaped sloping lot bisected by a deep ravine into an asset instead of a liability. He chose a circular shape but there were no curved walls in the building: the rounding was achieved by using many short walls bend by bend. The rounded shape was broken further by a storage extension on the west and a lozenge-shaped auditorium on the south.

Wynn Construction Company of the city was the original contractor for the library in 1963, and they are once again, the contractors for this extensive remodel after having been in business since 1944.

Two bookmobiles were added into service in this part of the city. Of course, a place to house those vehicles was needed too.

Mills tucked a two-bay garage under the main level which held up the main floor, and the garage was equipped with a maintenance area and storage area. This garage on the north side was in use until a 1988 remodeling project which was converted into meeting space.

By 1978, Belle Isle Library needed more space to serve the community. It had the highest book check-outs of all the libraries in the system. A bond issue, Proposition 12 would have added 15,000 more square feet bringing the total to 30,000 square feet. It was estimated that by 1990, Belle Isle Library would need 40,000 square feet of space to serve the community. The bond issue failed that year. Belle Isle would not be remodeled for another ten years.

In 2000, staff packed up the library for a series of minor remodeling projects: new paint, carpet, shelving, and furniture. The citizens of Oklahoma City helped Belle Isle celebrate two anniversaries over the years. In 2003, the staff journeyed back in time to the ‘60s with decorations to match for their 40th anniversary. In 2013, their golden anniversary was celebrated—50 years.

Today, we celebrate the $5.5 million renovation of the Belle Isle Library, designed by ADG, with a modern, glass enclosure wrapping around the Mid-Century Modern exterior of Jack Mills original design. The library referred to as the “Millennium Falcon” or the “Starship There is a story that Mr. Mills slept a few nights to see if the unique design did dampen the traffic noise on Northwest Highway 60 years ago. What will the next 60 years hold for the Belle Isle Library in its new adaptation of Mills’ design? 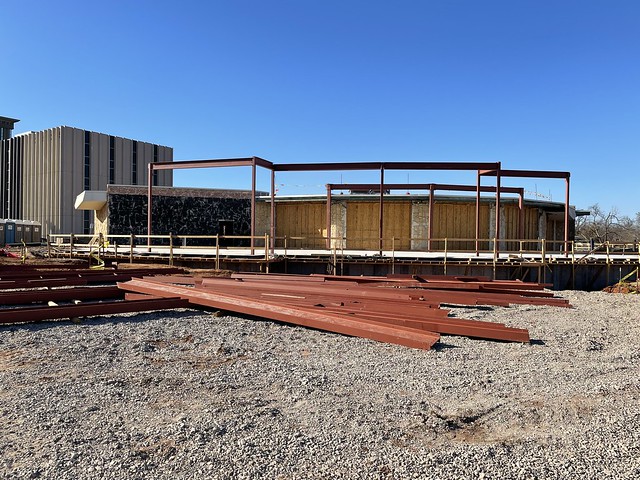