What Should You Read After the Babysitter Club Series? A Reading List for Tweens 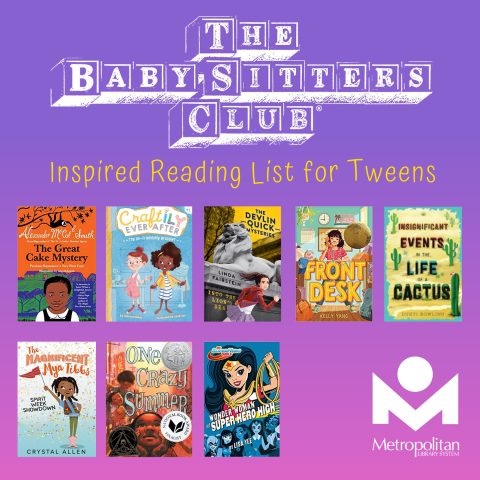 What Should You Read After the Babysitter Club Series? A Reading List for Tweens

The Babysitter Club is 34 years old! A landline phone, tie-dye t-shirts, and glittery accessories all helped give the BSC that iconic 80s and 90s look. While the BSC remains a great reading choice for tweens and teens, many other series have been written since then capture the spirit of female resilience and friendship.

In the first book of the Craftily Ever After chapter book series, a new student gets between best friends Emily and Maddie--and changes the meaning of their friendship bracelets.  Emily Adams, Maddie Wilson, Bella Diaz, and Sam Sharma are eight-year-olds with one special thing in common: they love to create. They each have unique talents, too Emily is great at constructing and building; Maddie has an eye for fashion, fabrics, and sewing; Bella is a gadget whiz; and Sam is a gifted artist. Together, these four crafty friends dream up new projects to design, build, and create and through their experiences, they'll learn how to handle various obstacles at school and in their everyday eight-year-old lives. (8+)

Nine-year-old Mya Tibbs is boot-scootin' excited for the best week of the whole school year--SPIRIT WEEK. She and her megapopular best friend, Naomi Jackson, even made a pinky promise to be Spirit Week partners so they can win the big prize: special VIP tickets to the Fall Festival.  But when the partner picking goes horribly wrong, Mya gets paired with Mean Connie Tate--the biggest bully in school. And she can't get out of it. (8+)

Have you ever said to yourself, Wouldn't it be nice to be a detective? This is the story of an African girl who says just that. Her name is Precious. When a piece of cake goes missing from her classroom, a traditionally built young boy is tagged as the culprit. Precious, however, is not convinced. She sets out to find the real thief. Along the way she learns that your first guess isn't always right. She also learns how to be a detective. (7+)

Get your cape on with the DC Super Hero Girls--the unprecedented new Super Hero universe especially for girls Readers of all ages can fly high with the all-new adventures of Wonder Woman, Supergirl, Batgirl, and some of the world's most iconic female super heroes as high schoolers.  Wonder Woman isn't like most high school students--but Super Hero High isn't like most high schools.  Wonder Woman is an Amazon Warrior and Princess. She has never left her home on Paradise Island. But she wants to be a super hero--the very best super hero she can be. In order to train at the most elite school in the galaxy, she has to juggle acing her classes, forging new friendships, trying to make the team for the Super Hero Super Triathlon, and her insane suite-mate sharing her every embarrassing moment on social media. (7+)

Book 1: Into the Lion’s Den

Someone has stolen a page from a rare book in the New York Public Library. At least, that's what Devlin's friend Liza thinks she's seen, but she can't be sure. Any other kid might not see a crime here, but Devlin Quick is courageous and confident, and she knows she has to bring this man to justice--even if it means breathlessly racing around the city to collect evidence. But who is this thief? And what could the page--an old map--possibly lead to? With her wits, persistence, and the help of New York City's finest (and, okay, a little bit of help from her police commissioner mother, too), Dev and her friends piece the clues together to uncover a mystery that's bigger than anyone expected--and more fun, too. (10+)

Eleven-year-old Delphine has it together. Even though her mother, Cecile, abandoned her and her younger sisters, Vonetta and Fern, seven years ago. Even though her father and Big Ma will send them from Brooklyn to Oakland, California, to stay with Cecile for the summer. And even though Delphine will have to take care of her sisters, as usual, and learn the truth about the missing pieces of the past.  When the girls arrive in Oakland in the summer of 1968, Cecile wants nothing to do with them. She makes them eat Chinese takeout dinners, forbids them to enter her kitchen, and never explains the strange visitors with Afros and black berets who knock on her door. Rather than spend time with them, Cecile sends Delphine, Vonetta, and Fern to a summer camp sponsored by a revolutionary group, the Black Panthers, where the girls get a radical new education. (11+)

Book 1:  Insignificant Events in the Life of a Cactus

Aven Green was born without arms--so when her dad takes a job running a dying western theme park in Arizona, she knows she'll become the center of unwanted attention at her new school. But she bonds with Connor, a classmate with his own disability to conquer. Then they discover a room at the park that holds bigger secrets than Aven ever could have imagined. Can Aven face her fears, solve a mystery, and help her friend, too? The sequel called Momentous events in the life of a cactus was released last year! I’m crossing my fingers for a third book. (10+)

Mia Tang has a lot of secrets.  Number 1: She lives in a motel, not a big house. Every day, while her immigrant parents clean the rooms, ten-year-old Mia manages the front desk of the Calivista Motel and tends to its guests.  Number 2: Her parents hide immigrants. And if the mean motel owner, Mr. Yao, finds out they've been letting them stay in the empty rooms for free, the Tangs will be doomed.  Number 3: She wants to be a writer. But how can she when her mom thinks she should stick to math because English is not her first language?  It will take all of Mia's courage, kindness, and hard work to get through this year. Will she be able to hold on to her job, help the immigrants and guests, escape Mr. Yao, and go for her dreams? Be on the lookout for the second book in the series called ”Three Keys” that will be released September 2020. (9+)