The Village Library parking lot is currently under construction. The library is open for business and curbside pickup is available all day.

The Ralph Ellison Library is open reduced hours for Grab & Go service! We are open Mon-Sat from 9a-5p and Sun 1p-6p. 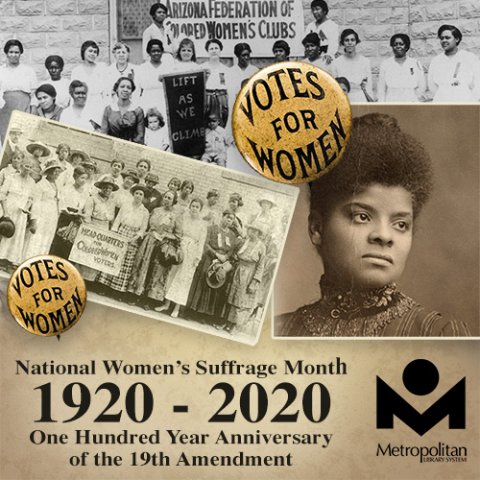 August is National Women’s Suffrage Month and this year marks the 100th anniversary of the 19th amendment to the United States Constitution. While the ratification of the 19th amendment dramatically changed and expanded the electorate, it did not usher in universal voting rights for all. Even after the 19th amendment was ratified on August 18, 1920 and certified official on August 26, 1920, millions of women of color remained disenfranchised and unable to vote.

The books, films, podcasts, and websites below highlight the important, yet often overlooked, stories of women of color who have fought for universal suffrage over the past century and continue to inspire.

Who was Ida B. Wells?

Born into slavery in 1862, Ida Bell Wells was freed as a result of the Emancipation Proclamation in 1865. Yet she could see just how unjust the world she was living in was. This drove her to become a journalist and activist. Throughout her life, she fought against prejudice and for equality for Black people. Ida B. Wells would go on to co-own a newspaper, write several books, help cofound the National Association for the Advancement of Colored People (NAACP), and fight for women's right to vote.

Finish the Fight! The Brave and Revolutionary Women Who Fought for the Right to Vote

Who was at the forefront of women's right to vote? We know a few famous names, like Susan B. Anthony and Elizabeth Cady Stanton, but what about so many others from diverse backgrounds—Black, Asian, Indigenous, and more—who helped lead the fight for suffrage? On the hundredth anniversary of the historic win for women's rights, it's time to celebrate the names and stories of the women whose stories have yet to be told.

Equality's Call: The Story of Voting Rights in America

The founders of the United States declared that consent of the governed was a key part of their plan for the new nation. But for many years, only white men of means were allowed to vote. This unflinching and inspiring history of voting rights looks back at the activists who answered equality's call, working tirelessly to secure the right for all to vote, and it also looks forward to the future and the work that still needs to be done.

One Person, No Vote: How Not All Voters are Treated Equally (young adult edition)

An adaptation of the New York Times bestselling author's book about the startling truth behind voter suppression in America. This middle grade adaptation brings to light the shocking truth about how not every voter is treated equally. After the election of Barack Obama, a rollback of voting rights occurred, punctuated by a 2013 Supreme Court decision that undid the Voting Rights Act of 1965. Known as the Shelby ruling, this decision allowed districts with a history of racial discrimination to change voting requirements without approval from the Department of Justice. This book follows the stunning aftermath of that ruling and explains how voter suppression works, from photo ID requirements to gerrymandering to poll closures. It also explores the resistance: the organizing, activism, and court battles to restore the basic right to vote to all Americans as the nation gears up for the 2020 presidential election season.

Lifting as We Climb: Black Women's Battle for the Ballot Box

Women of color, especially African American women, were fighting for their right to vote and to be treated as full, equal citizens of the United States. Their battlefront wasn't just about gender. African American women had to deal with white abolitionist-suffragists who drew the line at sharing power with their Black sisters. They had to overcome deep, exclusionary racial prejudices that were rife in the American suffrage movement. And they had to maintain their dignity--and safety--in a society that tried to keep them in its bottom ranks. Lifting as We Climb is the empowering story of Black women who refused to accept all this.

Princess of the Hither Isles: A Black Suffragist's Story from the Jim Crow South

Born during the Civil War into a slaveholding family that included Black, white, and Cherokee forebears, Adella Hunt Logan dedicated herself to advancing political and educational opportunities for the African American community. She taught at Alabama’s Tuskegee Institute but also joined the segregated woman suffrage movement, passing for white in order to fight for the rights of people of color. Her determination—as a wife, mother, scholar, and activist —to challenge the draconian restraints of race and gender generated conflicts that precipitated her tragic demise.

She Came to Slay: The Life and Times of Harriet Tubman

Harriet Tubman is best known as one of the most famous conductors on the Underground Railroad. As a leading abolitionist, her bravery and selflessness has inspired generations in the continuing struggle for civil rights. Now, National Book Award nominee Erica Armstrong Dunbar presents a fresh take on this American icon blending traditional biography, illustrations, photos, and engaging sidebars that illuminate the life of Tubman as never before.

Not only did Tubman help liberate hundreds of enslaved people, she was the first woman to lead an armed expedition during the Civil War, worked as a spy for the Union Army, was a fierce suffragist, and was an advocate for the aged. She Came to Slay reveals the many complexities and varied accomplishments of one of our nation’s true heroes and offers an accessible and modern interpretation of Tubman’s life that is both informative and engaging.

Why They Marched: Untold Stories of the Women Who Fought for the Right to Vote

Looking beyond the national leadership of the suffrage movement, an acclaimed historian gives voice to the thousands of women from different backgrounds, races, and religions whose local passion and protest resounded throughout the land.

For far too long, the history of how American women won the right to vote has been told as the tale of a few iconic leaders, all white. But Susan Ware uncovered a much broader and more diverse story waiting to be told. Why They Marched is a tribute to the many women who worked tirelessly in communities across the nation, out of the spotlight, protesting, petitioning, and insisting on their right to full citizenship.

One Person, No Vote: How Voter Suppression is Destroying Our Democracy

In her book White Rage, Carol Anderson detailed the history of policies that have systematically impeded Black progress in America, from 1865 to the present. She continues the story with a related history: the rollbacks to Black participation in the vote since the 2013 Supreme Court decision that eviscerated the Voting Rights Act of 1965. She also explores the resistance: the organizing, activism, and court battles to restore the basic right to vote to all Americans.

To Keep the Waters Troubled: The Life of Ida B. Wells

A biography of the crusader for Black people and women, Ida B. Wells was committed to journalism and activism, focusing on the horrors of lynching. She lectured in the States and abroad, arranged legal representation for Black prisoners, hired investigators, founded antilynching leagues, sought recourse from Congress, and more. Wells was also a forceful advocate for women's rights, but parted ways with allies who would subordinate racial justice to their cause.

The Woman's Hour: The Great Fight to Win the Vote

In August of 1920, enough states had approved the Nineteenth Amendment, granting women the right to vote. The battle is now in Tennessee. If it passes, the 19th Amendment will be the law of the land.  The opposition: politicians, clergy, corporations, and racists who do not want Black women voting, and “Antis” women who oppose the vote, fearing suffrage will bring about the nation's moral collapse. Following a handful of remarkable women, including Juno Frankie Pierce, who led efforts for Black women’s suffrage, this book is set six weeks before the historic vote, which also marked the opening campaign in the twentieth-century battles for civil rights.

Comprised of historical texts spanning two centuries, The Women's Suffrage Movement is a comprehensive and singular volume with a distinctive focus on incorporating race, class, and gender, and illuminating minority voices. This one-of-a-kind intersectional anthology features accounts of those often overlooked because of their race, from Native women to African American suffragists like Ida B. Wells and the three Forten sisters. At a time of enormous political and social upheaval, there could be no more important book than one that recognizes a group of exemplary women--in their own words--as they paved the way for future generations.

Vanguard: How Black Women Broke Barriers, Won the Vote, and Insisted on Equality for All

In the standard story, the suffrage crusade began in Seneca Falls in 1848 and ended with the ratification of the Nineteenth Amendment in 1920. But this overwhelmingly white women’s movement did not win the vote for most Black women. Securing their rights required a movement of their own. From the earliest days of the republic to the passage of the 1965 Voting Rights Act and beyond, Jones excavates the lives and work of Black women — Maria Stewart, Frances Ellen Watkins Harper, Fannie Lou Hamer, and more — who were the vanguard of women’s rights, calling on America to realize its best ideals.

Need access to NYTimes.com? Visit this link to redeem your 24-hour pass to access NYTimes.com content without hitting the paywall. If accessing from the library's wi-fi, simply navigate to nytimes.com and register for a free NYTimes account or login to your existing account.

Visit Kanopy for free video resources that you can access from home with your library card to learn more about the suffrage movement and voting rights.