Skip to main content
Important Announcement:
All libraries are closed through at least Thursday, 4/16. Please do not return checked out materials while we're closed. Please visit this site for additional information regarding your holds, fines, late fees, and other updates. 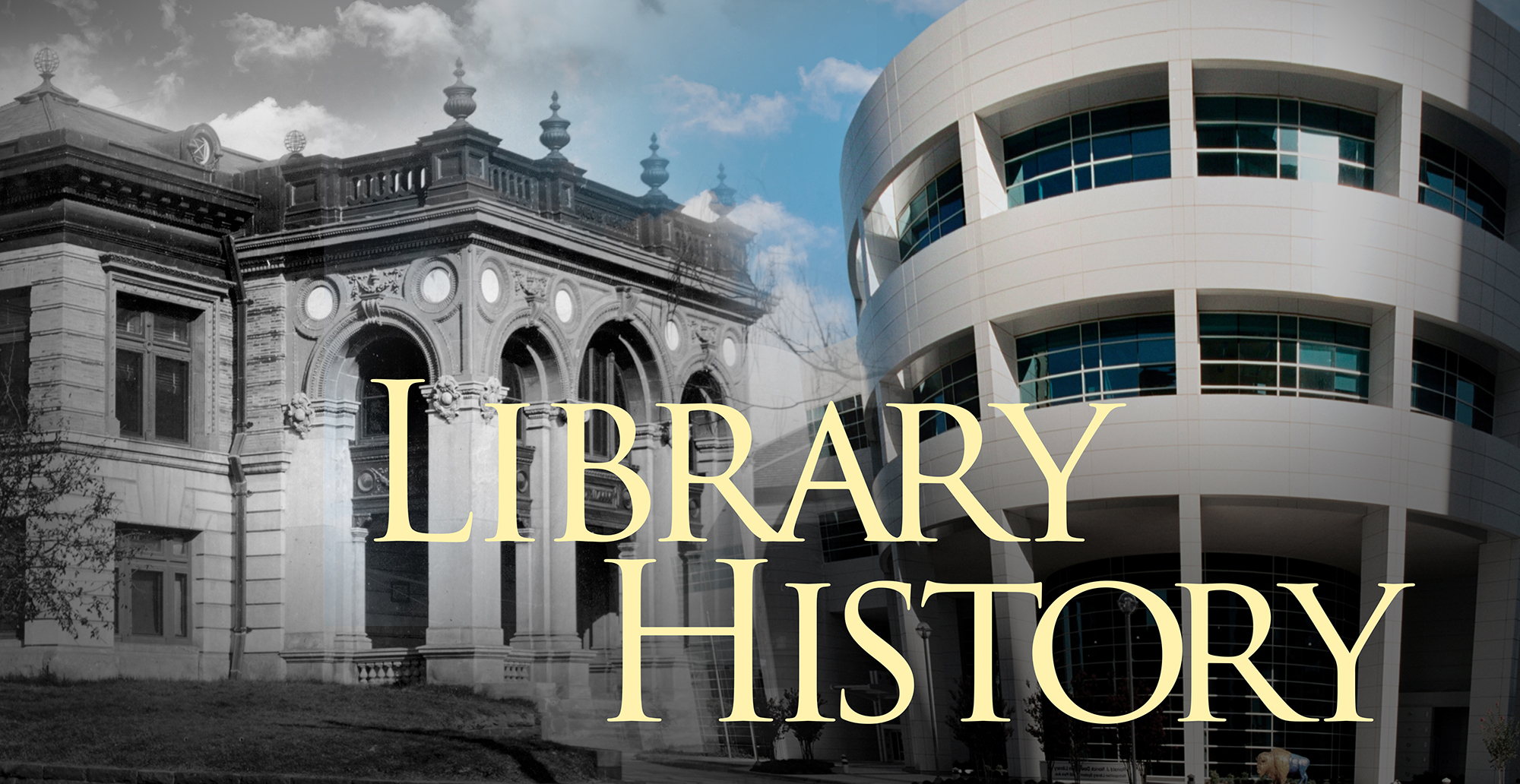 Much has been made of the fact that Oklahoma City was “born grown” when thousands of people settled in the city on the first day of the land run in 1889. The city may have been born grown, but it was still quite immature in its development of infrastructure and cultural pursuits. Not long after the Civil War the fashion of women's study clubs swept the country and nearly every settlement from village to city could boast of at least one club. In Oklahoma City the first club was formed in October of 1889 when the wives of leading merchants met at the home of Captain Stiles to form the Philomathea Club. Drawing its name from the Greek for “love of learning” the club “has held aloft without ceasing the torch of learning and light” even to the present day. The Philomathea Club immediately set about to improve culture and education in the fledgling city. Early on they assembled a club library, but under the leadership of the fiery Julia Douglas, the club began to press for the formation of a public library.

In the spring of 1898 Mrs. Douglas settled on the idea of tapping local businessmen for the funds for this new library and the club set about selling stock in the Public Library Association. Funds were raised in the amount of $500 and several books and a bookcase were purchased. The library was installed in an unused room in the Commercial Club (later the Chamber of Commerce) on the second floor of the Farmers National Bank Building on the southwest corner of Sheridan and Robinson. Within a year the Philomathean collection grew to 600 volumes and began to press the limits of the spare room. Clearly a new building was needed and Oklahoma City merchant Thomas P. Mellon, son of the great financier Andrew Mellon, suggested Mrs. Douglas write his father’s partner, Andrew Carnegie, for a library grant. (Carnegie provided funding for libraries all across America and would eventually build 1681 libraries in 1412 towns by 1923. Carnegie funded the buildings with the stipulation that the local communities staff and maintain the buildings and provide a collection of books.) Mrs. Douglas did just that and received a prompt reply in the promise of $25,000 assuming the conditions could be met.

The Club sprang into action and a site was chosen at the northeast corner of Northwest Third and Robinson. The architect was Marshall R. Sanquinot of Fort Worth and the cornerstone was laid August 16, 1900 with much fanfare. All the local dignitaries were in attendance and an original poem by Dr. Delos Walker entitled “The House of Books” was read. The Philomatheans also performed a ceremony in which corn, the emblem of plenty, wine, the emblem of joy, and oil, the emblem of peace were spread across the ground. The building was completed by late summer of 1901 and the grand opening gala was held on August 29.

Mrs. Marion Rock was the first librarian and she worked closely with the newly federated women’s clubs of Oklahoma City to provide an excellent library. A children’s department soon opened and met with great interest from the city’s youth. By the end of the first year, the collection had grown to 2137 books and by the end of the second, 7736. Over the next 50 years the library continued to expand services. In 1909 the building was expanded after receiving an additional $35,000 from Carnegie and $4,800 from the city. Branch libraries established in several public schools provided a way for books to reach the children without the expense of new facilities. Two new buildings were built in the 1920s, however. The Dunbar branch began in a store front at 303 North Stiles in 1921 and moved to a newly constructed building at 613 Northeast Fourth in 1926. This library was built with the support of the Federated Colored Women’s Clubs to serve the city’s black population. The Wright Library was built in Stockyards City that same year at 2101 Exchange on land donated by the area meat packing plants. It’s still in the same spot and is the oldest building in the library system.

In 1945, the Friends of the Library association was formed, largely because citizens had become concerned that a library built to serve 10,000 people could not adequately serve 250,000 as it was now expected to do. The Friends quickly won public support and were able to secure a $500,000 bond to provide for the construction of a new main library. In 1950 another bond, for $822,000, was secured to provide additional funds for the main library and a large branch to be built in the Capitol Hill neighborhood. The Capitol Hill Library opened in 1951 at 334 Southwest 26th and a year later, in 1952, the Carnegie Library fell victim to the wrecking ball. The new main library was built on the site of the old one and was opened in 1954. The 1960s saw sweeping change in library service for Oklahoma County. Towns in the county built their first libraries (Midwest City in 1955, Del City in 1958, Bethany in 1964) and Oklahoma City added Belle Isle in 1963. In 1960 the state legislature created new laws that made it possible for all the libraries in the county to cooperate under one umbrella and thus have better access to funding and equal access to materials and services. The new laws made it possible for the formation of the Metropolitan Library Commission to bring all county libraries together in 1965 under the name Oklahoma County Library System. New libraries came aboard soon after – Oklahoma City added the Southern Hills Library (now called Southern Oaks) while The Village Library opened in 1966, and Edmond and Warr Acres in 1967. Dunbar was demolished during the Urban Renewal period in 1968 but was replaced by the Northeast Library (now Ralph Ellison) in 1970.

In 1977 a new name – Metropolitan Library System – was selected to better reflect our mission. Since that time we’ve grown and improved to meet the ever-changing information and entertainment needs of Oklahoma County residents. We’ve added new locations across eastern Oklahoma County and in southwest and northwest Oklahoma City – 19 locations in all.