Renown Black American poet Maya Angelou said, “I always felt, if I could get to a Library, I’ll be OK.” The Metropolitan Library System will celebrate Black History Month with diverse library programs throughout Oklahoma County in the month of February. 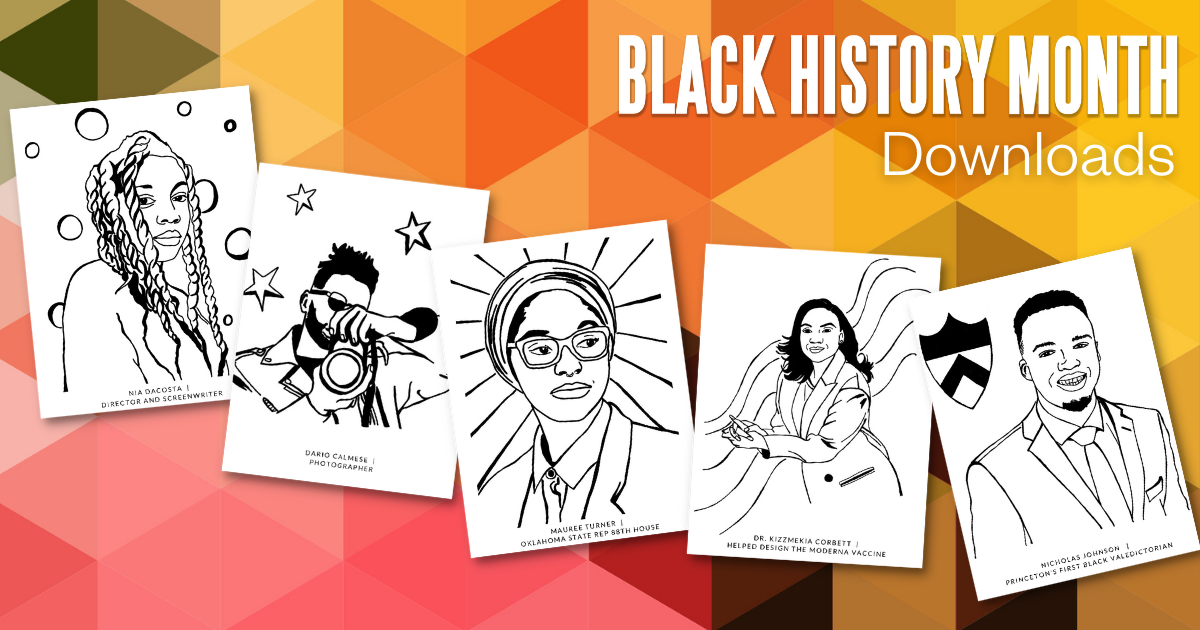 Celebrate Black History Month with our free downloadables created by the Ralph Ellison Library.
Each postcard, bookmark, and coloring page features an influential and inspiring African American, plus a bit of history on each individual. Use markers, crayons, or colored pencils to decorate the front of your post card and practice your writing and addressing skills on the back.

Tochi Onyebuchi is the author of Beasts Made of Night, its sequel Crown of Thunder, War Girls, and his adult fiction. debut Riot Baby, published by Tor.com in January 2020. He has graduated from Yale University, New York University’s Tisch School of the Arts, Columbia Law School, and L’institut d’études politiques with a Masters degree in Global Business Law.

His short fiction has appeared in Asimov's Science Fiction, Omenana, Black Enough: Stories of Being Young & Black in America, and elsewhere. His non-fiction has appeared in Uncanny Magazine, Nowhere Magazine, Tor.com and the Harvard Journal of African-American Public Policy. He is the winner of the Ilube Nommo Award for Best Speculative Fiction Novel by an African and has appeared in Locus Magazine's Recommended Reading list.

Born in Massachusetts and raised in Connecticut, Tochi is a consummate New Englander, preferring the way the tree leaves turn the color of fire on I-84 to mosquitoes and being able to boil eggs on pavement. He has worked in criminal justice, the tech industry, and immigration law, and prays every day for a new album from System of a Down.

This segment also features a co-host, Alex Brown. Alexandria Brown is a queer Black librarian, local historian, writer, and author of two books on the history Napa County, California’s marginalized communities. Her two books of nonfiction, Hidden History of Napa Valley and Lost Restaurants of Napa Valley and Their Recipes, are on sale now. She has a BA with honors in Anthropology and Sociology, a Master’s of Library and Information Science, and aMaster’s in US History. She writes about speculative fiction and young adult literature for Tor.com and Locus Magazine, as well as on her blog. Much of her writing covers Black history, librarianship, YA, and speculative fiction. Alex is ace/aro and biracial Black.

Shakirah Bourne is a Barbadian author and filmmaker. Her first feature film, the comedy-drama, PAYDAY, was screened throughout the Caribbean, USA and UK.The film won several awards, including Best Drama at the National Film Awards UK, Best International Feature at the Charlotte Black Film Festival and best UK Feature at the London Independent Film Festival. Her short stories have been featured in many literary journals. She was a finalist for the BURT/CODE Award for Caribbean Literature in 2018. The Caribbean edition of her middle grade novel, MY FISHY STEPMOM, was published by Blue Banyan Books (2019) and the North American edition, JOSEPHINE AGAINST THE SEA, will be published by Scholastic in July 2021. She was a Part-time Lecturer at the Errol Barrow Centre for Creative Imagination, University of the West Indies, Cave Hill Campus, and is a Part-Time Lecturer in Screenwriting at the Barbados Community College. She currently holds Certificates in Screenwriting from the Barbados Community College and the University of Edinburgh, and an MA (Hons) in Arts and Cultural Management from Queen Margaret University.

Shakirah's book will be released in July 2021.

Dr. Malika Grayson is a speaker, STEM advocate, and engineer based in Virginia. Growing up in Trinidad and Tobago, she left the island at the age of 19 to pursue her education. She holds a bachelor's degree in Physics, and a master's degree and a doctorate in Mechanical Engineering. She has shared her experiences about being a Black Women in STEM on a number of platforms including university collaborations, conferences, and special events. HOODED is her first book. Learn more at malikagrayson.com

Sarah Raughley grew up in Southern Ontario writing stories about freakish little girls with powers because she secretly wanted to be one. She is a huge fangirl of anything from manga to sci-fi/fantasy TV to Japanese role-playing games, but she will swear up and down at book signings that she was inspired by Jane Austen. Sarah has been nominated for the Aurora Award for Best Young Adult novel and works in the community doing writing workshops for youths and adults. On top of being a YA writer, Sarah has a PhD in English, which makes her doctor, so it turns out she didn’t have to go to medical school after all.

As an academic, Sarah has taught at McMaster University and acted as a postdoctoral fellow at The University of Ottawa. Her research concerns representations of race and gender in popular media culture, youth culture and postcolonialism. She has edited special issues in academic journals such Safundi, Popular Music and Society, and Atlantis: Critical Studies in Gender, Culture and Social Justice. She’s also written freelance pieces for The Conversation, Quill & Quire and Zora Magazine.


Home to More Historically All-Black Towns than Any Other U.S. State — their legacy remains an important part of the African American struggle for freedom, independence, and prosperity. Join us for a conversation of these historic towns as celebrated through the quilting of Beverly Kirk.

Jasmine Jones is a local artist and maker from Midwest City. The majority of her work focuses on thoughtfulness, interaction, and nature. Come watch her demonstrate her creativity through her newest piece in progress.

In partnership with Inclusion in Art, which is dedicated to promoting racial and cultural diversity in Oklahoma’s visual arts community.

Join us for a conversation with Laron Chapman, Oklahoma City-based screenwriter, producer, and director of “You People” —a comedy that challenges and explores the intersectionality of race, gender, class, and sexual orientation. It made its world premieres at the internationally known and renowned deadCenter film festival in June 2018. It was selected for 9 subsequent film festivals (including the Kansas City Film Festival International, Deep in the Heart Film Festival in Waco, Texas, among others).

The film garnered a string of prestigious awards on the festival circuit including Best Feature Film, Best Director, and Best Original Screenplay.

Watch "You People" on Hoopla

Join us for a storytime at your library online!


View Demetrius's Book in our Catalog


View Kim's Book in our Catalog

To celebrate Black History Month, we are highlighting Black Veteran stories. Join us as they tell the story of their lives both in and outside of the military.